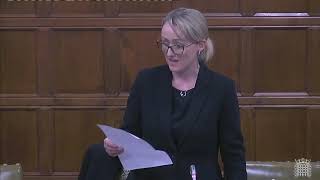 Over on the Opposition benches, we detected the covenantal tradition within left wing politics too. Rebecca Long-Bailey, known for her service in Jeremy Corbyn’s Shadow Cabinet, is usually thought of as a statist rather than a communitarian.

But in the lesser known debating chamber of Westminster Hall, often where powerful ideas on the fringes of political possibility first get an airing, Rebecca Long-Bailey was found praising a more plural measure of economic growth, including community power.